First and foremost, you need to understand that Campaign Trail is not a simulation.

Campaign Trail is the latest effort from Cosmic Wombat Games; its Kickstarter campaign began earlier this week. The game was conceptually invented decades ago by the designers’ father, and has now been lovingly developed into a finished, polished product. It has gone through years of iterations, playtesting, and yet more iterations, and it shows. No action you take feels stray, no mechanic feels clunky (in fact I can find only one fault in the gameplay, but more on that later).

The game is set during a US Presidential Election. Players take on the role of either a presidential candidate (when playing 2 or 3 players) or as one of their vice-presidential running mates (players 4 through 6). Secure the most electoral votes (the game uses the US Electoral College system, not direct popular vote) by having more voter tokens in the states than your opponents, and you win.

The game wisely abandons most pretenses of accurate simulation in the name of game balance.

Political party choices are Democrat, Republican, and Independent, but are so in name only. Beyond the use of the Electoral College – and accurate electoral vote values for each state as of 2010 – the game wisely abandons most pretenses of accurate simulation in the name of game balance. The three parties start on equal footing, the initial electoral vote tally at game start being almost equally split three ways, and everyone has the same opportunities to fundraise, campaign, and debate.

Though it includes hot-button political issues of the current day, like same-sex marriage, immigration, and gun control, it does not ask you to declare a position on any of these. You advertise or debate about these issues, but not for or against them, and your rewards for doing so are the same regardless of which party you represent. In that sense, the parties might just as well be called “Red Team”, “Blue Team”, and “White Team”. You do not need to fear derailing any game nights (or friendships) talking about politics while playing this game. The only awkwardness I ever felt came at the very beginning of my first playthrough, when I sat down to play with a friend who shares the same political leanings as myself, and one of us had to blink first and say which color they wanted to be.

The parties might just as well be called “Red Team”, “Blue Team”, and “White Team”

Each turn requires two basic decisions of the player, namely, which card from their hand they are going to play, and what action from that card they are going to take. In what is one of the best design decisions of this game, every card has four (out of six total types) of actions from which to choose from. You either travel (move your candidate meeple around the map), fundraise (cha-ching), register voters (put tokens into your reserve), advertise (carpet bomb the map with a tokens spread across the states), campaign (dump a boatload of tokens into a concentrated area), or conduct a special event. Without reciting the entire rulebook, suffice it to say that these actions have various power levels, and the cards are constructed such that all of the choices on a particular card have approximately equal power, though some cards are more powerful than others.

My two playthroughs of the game were a two-player affair and then a three-player session. The two-player game started slowly as we took a long time to look at each card we drew, analyze its four available actions, and try to decide the best course of action.

After burning through approximately one-third of the deck (playing one card each per turn from a hand of five), and again after two-thirds, the game enters a debate phase. At the debates the utility of the cards changes completely, as now you use only the political issue icons printed on each to try to make points and counter your opponents. The result of the debate is a tremendous drop of voter tokens onto the map, and games can really hinge on how well you do in the debates – in the three-player game, a disastrous debate performance by one of my opponents all but eliminated him from contention.

Once you start to learn the cards (there are, thankfully, several copies of each, which means you have less to remember), the pace of the game picks up, and it’s on to Election Day and one last special voter token dump. In my two-player game, the Republican ended in control of California and the Democrat took Texas – possibly the least likely outcome of the upcoming 2016 election imaginable. In the three-player, I, playing as the Republican who had not really spent any time or money in Texas all game, swooped in on Election Day and suddenly took the state, securing the victory (Constitution nerd alert: I won despite not securing an actual majority of the electoral votes – no special sessions of Congress here!)

It was this last bit that is the only part of the gameplay I am not sold on. You see, the only reason I could execute that surprise in Texas is because of the special power granted to me by a random card draw at the beginning of the game. Some of these abilities – each also comes with an offsetting handicap – seemed too powerful, others too frivolous, still others so cumbersome to use that they slowed the game down way, way too much (adding, by our estimation, nearly an hour to the playtime). The next few times I play, I plan to try going vanilla and seeing how the game plays without any of these powers.

The numerous and well-made components justify the slightly hefty cost of this game ($54 plus $10 for U.S. shipping if you back it on Kickstarter). The prototype’s graphics were excellent, and I’m excited to see how the final art will turn out.

Have a blast with one of the best games you will play this election year.

Whether or not this is a good family game for you will be dependent on the ages and interests of your kids. The publishers recommend 13+. While the rules are not terribly complex, knowing which choices to make from your cards would be very difficult for most pre-teens. And thanks to the game’s length, I doubt anyone under 10 has the attention span to even play on Mom or Dad’s team. That being said, if your older offspring show interest in current events, civics, or are running for student council president, this game will captivate them – and you. Back it, eagerly await that shipping notification, and have a blast with one of the best games you will play this election year.

Just don’t get mad when the Democrat takes Alabama.

You can check out Campaign Trail on Kickstarter right here. 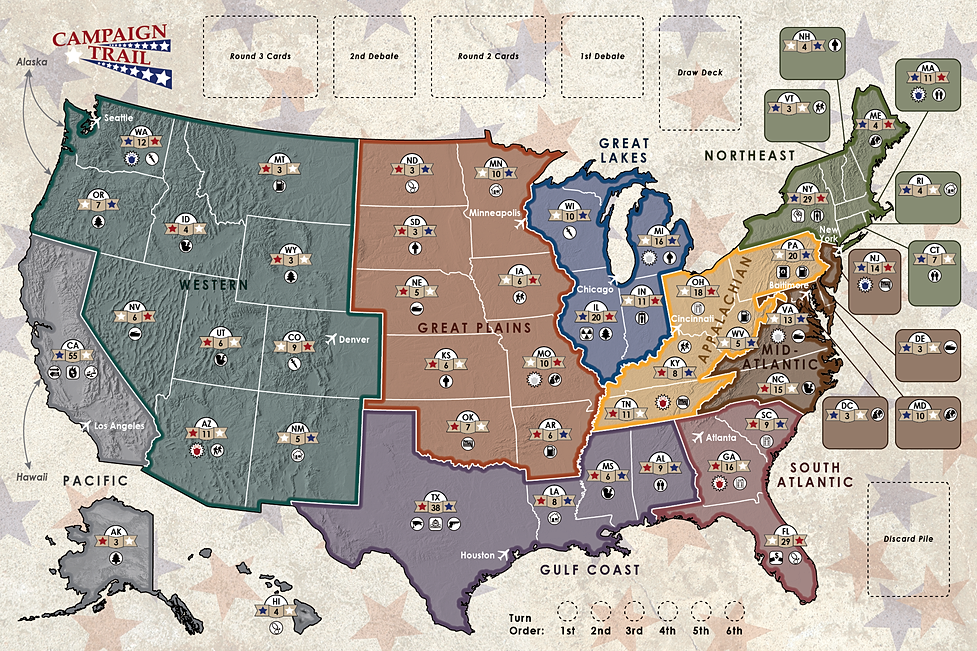 Let’s … go to the map! (Final version is more colorful, with clearer symbols.)

The Family Gamers were provided a pre-Kickstarter Campaign Trail prototype for testing that was shipped to another reviewer.